Episode 202: A Day of Drawing, a Festival of Films, and Other Matters 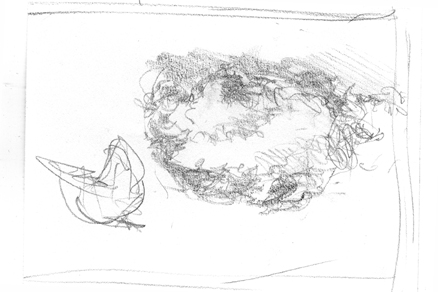 1. Drawing Day 2009
Saturday before last was, you may recall, Drawing Day, an annual event that attempts to get people drawing worldwide with
the goal of producing 1,000,000 drawings. The Thursday before, I was out back on the patio practicing for it, and when the shadow
of some flying something or other fluttered across my sketch pad, I looked up and saw what seemed like the perfect inaugural
image for this year's project, so I made the rough you see above. Friday, I learned that they were already accepting
pictures, so I went to Pencake.com, an online Ecard drawing platform that was hosting a Special Drawing Day Event, and
made the little scene you see below.

Please keep in mind that I was drawing with a mouse, and right-handed at that, which accounts for the piece's slight zombielike quality.
And speaking of zombies...but I'm getting ahead of myself. Just click on the image below, and it will take you to a page
at Pencake where you can watch the picture draw itself. It's much more interesting that way. 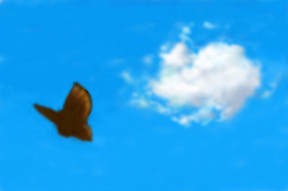 And then the Big Day dawned, with gorgeous weather that held all weekend long...although way up in Minneapolis, it was
cold and wet. How do I know? I just know, that's all. Well, let's just say I have contacts, okay? Look,
don't worry about it right now; I'll explain in a minute. I gotta tell you about some other stuff first.


2. 10 Hours o' Fun!
That same Saturday was also the day of the Marble City 10-Hour Film Festival. (Did you know that Knoxville used to be called
The Marble City? Me neither. But it was, on account of this.) In case you're not familiar with this sort of competition, a 10-Hour Film
Festival is just that: You get some friends together, form a team, find a camera, and show up at 8 am with whatever idea you have
ready to go. Then, you are given a list of three "ingredients" that every film must include. After that, you are turned loose...and by
6:30 that evening, you must turn in a short film with a running time of at least three minutes

I was participating by taking a role in the entry written and directed by Kelly Burke. As we were milling around in Market Square
that morning waiting to learn what our three ingredients were, I tried some fast sketches, almost all of which came to naught.
I'll only bother you with two examples:

On the left, some dude in shades who was waiting for the competition to begin; on the right, a sketch of our
producer/editor Kent Edens which I abandoned when it suddenly and inexplicably turned into a picture of Robert Loggia.

We received our list of ingredients: A dozen eggs, a string of pearls, a compass. Then the trouble began: the Powers That
Be have decided that you must also pick a genre, a complication which adds a lot of fun to a 48- or 72-hour festival, but, when
you have less than half a day, can wreak out-and-out havoc. Which it did. The original idea was completely scrapped.

From that moment on, the day became...well, hectic isn't the word. We ran to the Crowne Plaza Hotel, where Kelly had
reserved a room to use as an editing space, and chipped in what help we could as he came up with a whole new idea on
the spot. Somehow a new location was secured, and we grabbed all our stuff and ran back to Market Square. We started
taping at noon, with pretty much every move anyone made invoking its own little butterfly effect. At one point, I realized
that when we cleared out of the hotel, I'd left my cell phone charging on the floor, so most of my acting involved using
my sense memory to portray a man who's just realized he's left his cell phone at the hotel and may never see it again.
(Happily I found it later, right where I left it. Then I couldn't avoid fretting over the two missed calls it displayed, both from
a cell phone number I didn't recognize. It didn't say I had a message, either. The next day, though, I remembered who
it was: Pat, who was Pat Bible back in the day, and who is now Pat Everheart, and living in Minnesota. But anyway.)
After the editing was finally finished, as Kelly and Kent were dashing across Market Square to turn their still-rendering
DVD copy in, the battery fell out of the MacBook, and they had to stop and deal with that. Stuff like that. All day.

So for the rest of the afternoon, drawing kind of fell by the wayside. Keri McClain, my Drawing Day partner and a
production assistant on our movie, summed it up this way.

Later, during the screening at the Bijou, as the films began to blur together (there were 27 of them), I sketched this kid, who
was offering as succinct a piece of film criticism as ever I've witnessed. The result was utterly generic, with no personality
whatsoever, but that was what I liked about it. It looked like a kid from one of those pamphlets they used to hand out when I was
in grade school, things with titles such as Fallout and You!, or perhaps an ad from a Space-Race-era magazine you might find
in The Institute of Official Cheer at Lileks.com. (You know the site I'm talking about? If you don't, please wait to check it out.
If you go there right now, I'll never get you back.)

Later still, I did one more sketch I liked: 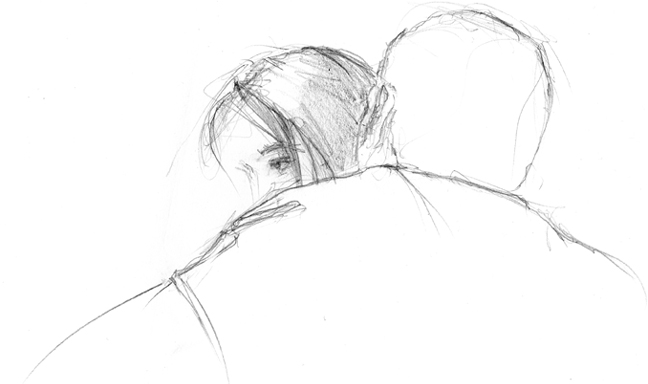 It's supposed to be a picture of Mike Stanley and Avi Tomczak, who starred in another 10-hour short, Believe, written and directed by David Rowlett,
who that night participated in Drawing Day when we handed him a pencil, shoved a sketchbook under his nose, and informed him he was going to
participate in Drawing Day. He produced this, which commemorates Believe, our short Audition, a piece by Jeff Delaney that we all admired
but whose title no one could pronounce, let alone spell, and Zombie, which won both the first place and audience favorite awards.

Believe can be viewed here; I'm still looking for a link to Jeff's film. And if you want to see Audition, click here.
As you may have gathered by now, I'm the guy with the cap.

3. Another Drawing Exercise
Still, I'd hoped to do more, so I thought I would resurrect an idea I'd had a while back, based on a drawing exercise I learned
years ago and had picked up again over the last few months. What you do is, while you watch TV, you try to draw what's on it.
It forces you to do extremely fast gesture drawings without time to think, and you improve at a much faster rate than you'd expect.
Since I'd been watching a lot of film noir, I thought my evolving sketches, really not much more than doodles, might make a cute
recurring bit for the Rebus. But I abandoned the idea; no matter how much I tried to milk it, it just didn't seem substantial enough,
and besides, it seemed too much like the Black and White World and 100 Mysteries series that Lileks features on his site. In fact,
there were really only two differences: the sketches aren't quite as interesting as the screen grabs he offers, and, considering we're
dealing with a major humorist whose buddies include Dave Barry and Mike Nelson, it's often the case that my commentary
falls into the "not as funny" category. But in the spirit of The Day, I thought, I might get away with it.
I call it

Directions:
1. Watch a film noir. No pausing permitted.
2. From time to time, turn away from the TV.
3. Draw what you just saw.
4. Repeat until you have something recognizable.


Watch Me Learn: Below, two progressions from early in the movie till close to the end. First, the male lead:

Left to right: A total loss, what looks to be a production sketch from an episode of My Three Sons where Steve goes to a costume party
dressed as Walter Neff, one that would be a spoiler if there were any more to it, and finally a decent MacMurray. Next, the femme fatale:

Left to right: Nope; next; swing and a miss; ...well, maybe not Barbara, but definitely some Phyllis Deitrichson in this last one.

The Deitrichson daughter, the guy on the train who spoke to Walter, and the most hilarious Edward G. Robinson I've ever seen.

Okay, that's enough of that for now. Hey look, they said they wanted a million drawings. Nobody said anything about good ones.


4. A Phone Call.
Sunday, as everything was winding down, we went to Wasabi, one of my favorite restaurants in Marbleville,
and on the off chance that my phone — which does this from time to time — had recorded a message the afternoon
before and just not told me, I checked my voicemail...and as I listened, everyone else around the table suddenly
started miming What? What? The closest I have for a visual here is this. It's the handwritten transcript I
jotted down while playing the voicemail over and over, grinning like an idiot the whole time: 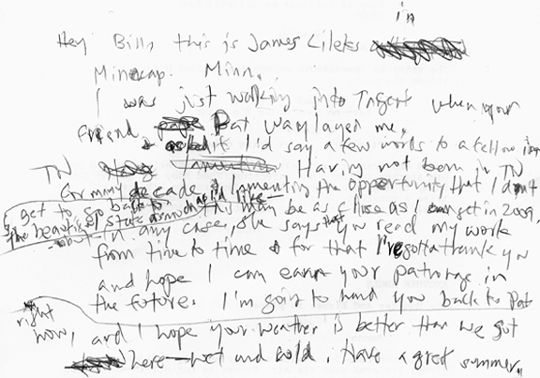 If you're having trouble reading it, here's what it says:
"Hey, Bill. This is James Lileks in Minneapolis, Minnesota. I was just walking into Target when your friend
Pat waylaid me and asked if I'd say a few words to a fellow in Tennessee. Having not been in Tennessee in
many a decade and lamenting the opportunity that I don't get to go back to the beautiful state as much as I'd like,
this may be as close as I can get in 2009. But in any case, she says that you read my work from time to time,
and for that I gotta thank you and I hope I can earn your patronage in the future. I'm going to hand you back
to Pat right now, and I hope your weather is better than we got here — wet, and cold. Have a great summer."

Lileks. At Target. Accompanied, I learned the next day, by the Giant Swede. It just plain don't get more Lileks than that.
You can imagine the effect that had on my mood.

No? What do I gotta do, draw you a picture? Okay.

Two Studies for Guy with a Cap Making a Fool of Himself at Wasabi  Pencil, 10" x 4"

Yeah, I think maybe I'm well on my way to having a great summer — thanks to Pat, James, Kent, Kelly, Mike, Keri,
Kevin, David, Rachel, Avi, and God knows who all else I'm mindlessly glossing over here.

I had fun with these drawings, and I don't mind that they're so rough and wispy; the hit-and-miss quality is part of the charm
with a thing like this. But I realize they may be tad on the boring side for some of you. So if you want,
click on this to watch my final Drawing Day effort, a right-handed kitty-cat picture: 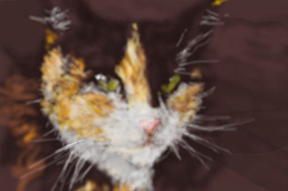 The Picture of the Week / Rebus Archives: